Do you know about an app that solves math problems by taking a picture? This is not a joke! You can easily solve math equations with your Android or iPhone camera. In this technology world, nothing is impossible. Camera technology on smartphones is improving rapidly. Along with the lenses, some app developers are also creating awesome apps to feel and get DSLR like photos with your phone. From time to time, an app occurs that combines two existing technologies in a means that merely is reasonable.

Mathematics has always been a tough subject for most of the students; actually who don’t understand it. People usually use a simple or scientific calculator to solve math problems quickly, especially engineering students. Modern gadgets are making us lazy, and we are not exercising our brain to solve mathematical equations.

If you are one of them, who don’t like math, then there a surprise for you, named Photomath – Camera Calculator. It is a great app that solves math problems with camera. Yes, it is true. By using this application on your Android or iOS device you can solve a various type of math problems instantly.

What is Photomath – Camera Calculator 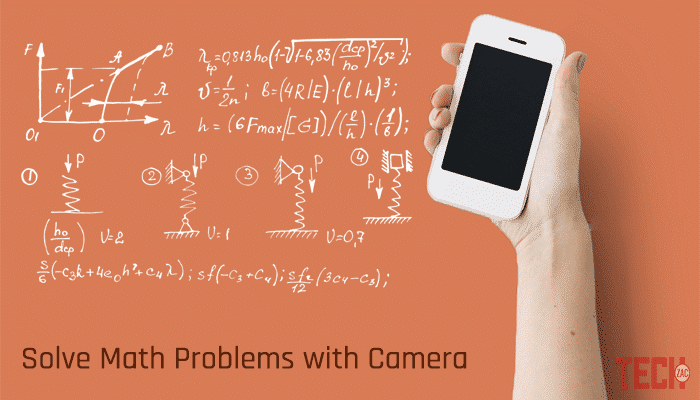 Photomath – Camera Calculator is a source which kids can use to solve mathematical issues. Simply point a device, like an iPad, toward an issue. The device’s camera then scans the issue and generates the solution within minutes. It is an easy to use the application to solve math problems with camera of your Android, iPhone or iPad. It supports more than 200 mathematical equations.

The new technology also supports handwritten texts like arithmetic, integers, fractions, decimal numbers, roots, algebraic expressions, linear equations, quadratic equations, absolute equations, systems of equations, logarithms, trigonometry, exponential and logarithmic functions, derivatives and integrals. The free version indicates the steps for solving an issue. But more detailed explanations of these measures are available with a paid subscription. While it might be a fantastic learning service tool, there is a risk that kids could use the program for a shortcut into completing assignments.

PhotoMath gives you instant results. Perhaps this application of contemporary technology boundaries on cheating, but that all depends on your intent. It is highly unlikely that your mathematics professor will allow usage of smartphones and tablets during evaluations. The objective of using PhotoMath is to sharpen your math skills before taking a check. It tries to make math easy and simple by educating users on the best way best to address problems. It is available free of charge for Apple and Android devices.

The app’s developers claim that PhotoMath helps you learn how to solve captured problems and equations via ‘human like’ solving steps. It shows you one solution to solving a problem. That strategy, however, may not always be the most direct or approved method.

The app provides Camera calculator, Handwriting recognition, Step-by-step instructions to use this app, Smart calculator, etc. The app is available for both Android and iOS devices. Follow the below button to download this app on your smartphone.

Use Photomath App to Solve Math Problems with Camera 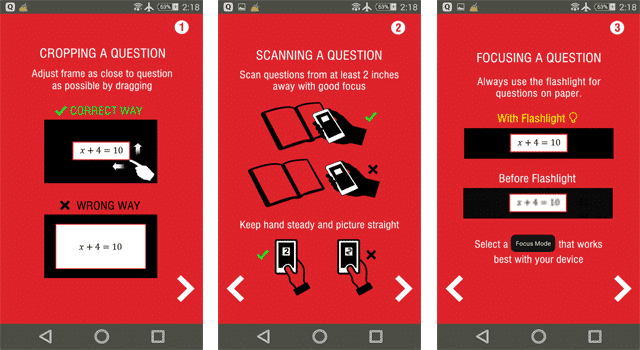 You can view all the step by step instructions at first startup or by clicking on “How to use” option from the app menu. It also has an inbuilt smart calculator, which is used to solve complex mathematical problems that are not recognized correctly by the camera. If you are using this app at night, then you can use the flash light icon on the camera interface to capture an equation.

1. Open Photomath app and position the equation inside frame while holding the phone straight above. You can drag to adjust the size and shape of the frame.

2. The result will show up on the screen in Red.

3. Tap the Steps button to see how to solve. You can tap the arrow buttons or swipe up and down to see the steps.

There is another app AutoMath which is currently available for Android users also does the same work like PhotoMath. It is a math app that solves any problem. It will give you the response of any mathematics question by simply taking a photograph of it. This is a fantastic way to verify your homework, research and learn mathematics. Automath even provides mobile tutoring by a live tutor that will assist you to understand any math topic.

This was the app that solves math problems by taking a picture on Android and iOS. PhotoMath and AutoMath are the two popular apps to solve math equations with camera. Try these two apps and share your opinion.