Have you ever tried to know, how to block number in Nokia 3310 keypad mobile? Technically, it is not possible. Nokia used to be one of the top mobile manufacturers of the world, but it went down with the coming of Android smartphones.

In 2014, this company was sold to Microsoft company. But, now it is back in 2016 to make phones under Nokia branding. In early days, Nokia was making two types of phones; basic phones and Symbian-based smartphones. Till now, there was no Nokia phone with number blocking feature, but you could install third-party apps on Symbian phones to it.

But, the time has been changed. Blocking calls on Nokia phones is now possible. Because it has launched three Android phones and one basic phone. This core phone is the remake of the legendary Nokia 3310. It was one of the most successful phones with 126 million units sold worldwide. The new phone is the comprehensive update over its predecessor with a larger display, slimmer body, SD Card slot and much more.

I am a big fan of Nokia phones for the durability, long-lasting battery life, and the design. The new Nokia 3310 looks so beautiful. It is not as much durable like the old one, but it will make you smile when you hold it in your hand. Let’s come to the features.

It comes with a 2.4-inch full-colour display with 240×320 pixel resolution. The old phone didn’t have a camera, but the new one 2-megapixel camera on the back with a flashlight. You can also use this flash as a torchlight. The 1,200mAh battery is rated to deliver up to 22 hours of talk time and up to a month of standby on a single charge.

It has Bluetooth 3.0 connectivity and supports 2G dual SIM. As I said before, you can use a memory of up to 32GB via a dedicated micro-SD card slot to expand and store your media files. This is the overall feature I found in my Nokia 3310 (2017).

How to Block Unknown Numbers Nokia 3310 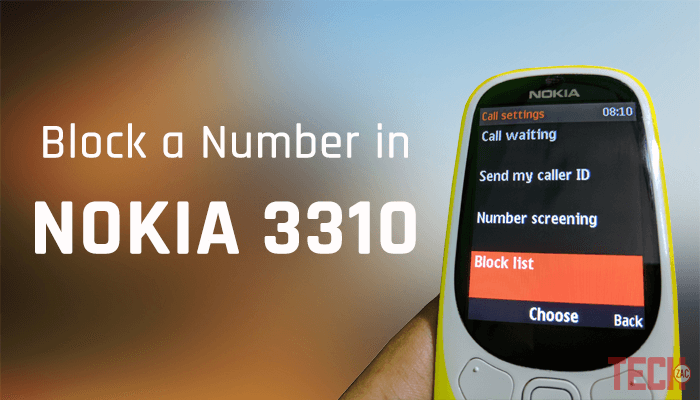 Getting unwanted calls on your phone may be a pain. You can block number in Nokia keypad phone by taking benefits of the phone’s security features. After playing for a few days, I found that this is the first Nokia basic phone with number blocking feature. I have used a lot of basic Nokia s40 and JAVA phones, but they didn’t have call blocking facility.

Basic phones such as Samsung, Micromax, and other Chinese manufacturers have an inbuilt facility to blacklist phone numbers. Nokia 3310 block list get a busy tone when they try to call you. In that way, you can stay away from unwanted calls. So, let’s know how to how to block incoming calls in Nokia 3310. There are three ways to block a phone number. Let’s try it one by one.

Nokia phone settings have some easy to use features you found in a basic phone. You just need to toggle a few options and you are ready to reach the call blocking facility. Well, let’s do that.

3. Type a phone number which you want to block or choose one number from your Contacts list and press OK. That’s it. Now you have successfully blocked a number in Nokia 3310.

If you don’t want to go through your mobile settings and still want to block unwanted callers in Nokia 3310, then Contact list is the easy way to get that. If any of your friends are disturbing you while work, then you can do that. Follow the below steps to do that.

1. On your new Nokia 3310 phone, go to Menu → Contacts and Choose a number which you want to block.

3. You’ll get a confirmation message, “ll calls from this number will be blocked. Add to list?”. Just press the OK button. That’s it.

Call log stores the data of your Dialled, Received and Missed calls numbers. If you are getting calls from unknown numbers, then you can easily block them here. Nowadays, marketing companies are calling with unwanted products.

3. Again press Options and choose “Add to block list”. Just confirm the confirmation message and you are done.

This was the tutorial on how to block a number on Nokia 3310 keypad model phone. You can use one of these three ways to block incoming phone calls. Nokia 3310 unblock number is so easy. You have to follow the first procedure and remove the number from the block list. That’s it. If you are a Nokia fan, then don’t forget to share this with your friends.