Top reasons to jailbreak iOS 10: If you are an iOS lover, then you might have listened to the word jailbreak. What is jailbreaking? As like other mobile operating systems, iOS also has some limitations for security. Jailbreaking is the procedure to permits root access to the iOS file system and removing software restrictions imposed by Apple. The word rooting on Android device is equivalent to jailbreak on iOS devices; such as iPhone, iPad, and iPod Touch. A lot of people question on why should I jailbreak my iOS 10 in 2016? To clear their doubts, here I have listed 20 top reasons to gain root file permission on a iOS 10 device.

I am very new to Apple’s mobile operating system, and I always try to reveal new tweaks on my devices. I have already posted on why should you root your Android device and what are the easy procedures to root them. Now the time for iOS devices. Apple adds a ton of new features every year in the new iOS version. There is still so many things you can do on a jailbroken device that you can only standard non-jailbroken.

Why Jailbreak iOS 10 on iPhone or iPad? 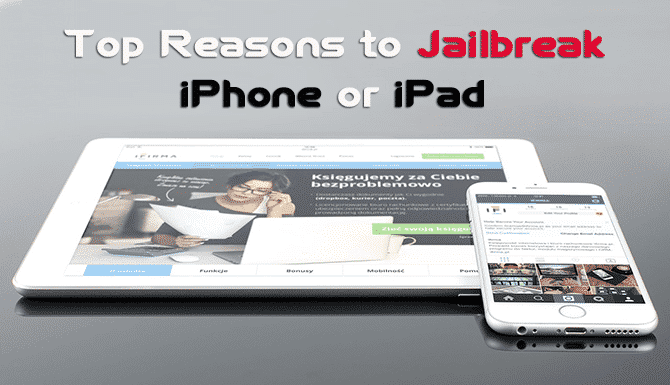 A lot of people think, you just jailbreak your device to customize its interface, but it’s short of true. You can do more than this. I believe there are still some excellent reasons to jailbreak iOS 10 on iPhone or iPad. Here are some of the top reasons you should know:

Jailbreaking allows you to apply different skins to your iOS device. If you want to apply a personal look to your iPhone or iPad, then you can easily do it with the various themes to a whole bunch of apps even from the App Store give your iPhone a look at nobody else has. It offers different looks like Android, Mac, Windows and much more.

Animations give a live experience on digital devices. After jailbreak your iPhone, you can download and apply different animations to so many areas that didn’t exist before. By using various tweaks, you can easily customize the look and feel of your device. such as maximize the number of apps in the dock, change the period of the system animations, remove the page limits, hide icons of inbuilt apps, resize apps icons and much more.

Live photo option is only available on iPhone 6S, 6S Plus, and SE models. If you got an iPhone before these models, then the Live photo feature is only can be available through jailbreaking. You can take live photos on any older device running iOS 10.

The multitasking feature enables your device to run two apps simultaneously on the same screen. It not only saves your time but also increase your productivity. There are so many possibilities you can do with the multitasking feature. This option comes by default on larger screen devices like iPad. Therefore, you need to jailbreak your iPhone on iOS 10 to enable this feature.

There are no ways to see your music and videos files as well as other system files on an iOS device. iOS 10 includes an app for iCloud Drive. But it is still very limited to explore things. iFile on jailbroken devices unveils the possibility to access your devices internal files. Besides, it allows you to modify text files and property lists, which can be very handy sometimes.

#6. Get iPad Features on iPhone

Using the jailbreak, you can get iPad exclusive features on your iPhone. Get the ability to play a picture in picture video using an iPhone with an easy tweak. It is so well made, very well optimized and works super well.

One of the biggest gripes with iOS 10 is the lack of a night mode. With a Jailbreak, you can quickly reduce eyestrain with a night mode. It’s customizable color wise mode works well in iOS. You’d be surprised to know how comfortable your eyes feel after adding this tweak, especially if you tend to use your iPhone just before sleeping. In addition to this, it also helps you get rid of that spooky glow on your face when using your iPhone at night.

iOS 10 has some extra features that don’t come to use but as a part of the system they use your system resources. By applying a simple Cydia tweak, you can easily get rid of them. This tweak not only helps to remove unwanted features but also increase your device’s performance.

The iPhone’s camera is one of the best smartphone camera available on the market. Let’s make it better, using Cydia tweak. I posted some best photo editing apps for iPhone and iPad devices to improve the image quality. Take pictures from the home screen faster without needing to open the camera app. The users can disable flash while recording a video. Now, it has the ability to pause and resume recording without needing to cut and start a new clip. Also the ability to quickly reverse cameras by tapping on the display and go to your front facing camera.

An iPhone or iPad with root access opens the possibilities to apply different security tweaks on your device. With various locker apps, you can protect your folders and apps with Touch ID.

Another huge reason to jailbreak is the ability to customize social media applications. Snapchat allows the users to share their location with their contacts. By applying a tweak, you can easily spoof your friends by showing them a different place of the world. This is a really cool feature for iOS devices. Even you can change the functions and feel in various social media apps like Facebook and Instagram.

Samsung phones have the ability to change system fonts which look really cool. You can easily get this feature on your jailbroken iPhone and iPad. It permits you to change and modify the font in apps, Lock screen, and more. Apply your favorite font on your device and change the way of reading.

The use of Bluetooth on the iPhone and iPad is very limited. You can actually unlock the functionality and transfer any file to any iPhone or similar divides.

This might be very useful for older iPhones with iOS 10. This is the same tweak which actually exist on Android devices, and it works without rooting to enhance the performance. After applying this tweak, you can feel the significant changes on loading different apps.

Battery life on iPhone really sucks. The Plus series are only able to live longer with a larger battery but the smaller devices aren’t. Jailbreaking can go over and beyond in increasing your battery life even further than Apple’s new iOS 10 battery saving features. There are so many methods and strategies which actually improves your iPhone’s battery life on iOS.

To make your iPhone’s screen sleep you use the power button. Alternatively of having to press the power button to dim and lock your iPhone’s display, you can automate this function. By using FaceDown from dev Ron ThakrarAt the time, when you place your device’s face down it automatically goes to sleep mode. This tweak is very useful and power-saving for those who regularly leaves their screen on. Once it’s installed on your device, you don’t need to setup or configure — just place the iOS device’s face down and enjoy the benefit.

If you have a 16GB variant, then why should you jailbreak your device? Jailbreaking can allow you to maximize the storage in iOS by removing so many files you don’t need. Even over the air updates that Apple loads on your device without your permission.

Emulators are the application which is used to play different games from other platforms. You can use emulators to play games from Play Station and other gaming platforms. And the best thing is Apple can not remove them; they are permanent.

The best thing in Apple devices is, with every new flagship they come with news features regarding software and hardware. If your device is jailbroken, you can easily get these future features on your older iOS device. So, you don’t need to wait for the further update.

This is the end of 20 top reasons to Jailbreak iPhone or iPad on iOS 9. Hope you liked them. If you are like me who loves to try new features on the devices, then you would love these tweaks on your iOS device.